A woman carer accused of killing a policeman and a grandmother in an horrific crash, walked free from court today after a jury cleared her of all charges.

Motorist Agne Jasulaitiene had been on trial for a week, accused of killing TV’s Road Wars police hero James ‘Dixie’ Dixon and her friend, 91-year-old Gladys Goodwin, for whom she was caring.

However, a jury took less than an hour to decide that she was not guilty of the two charges of causing death by careless driving. 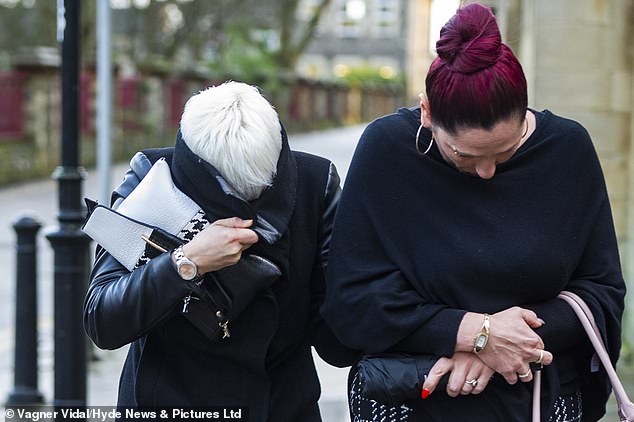 Agne Jasulaitiene, pictured left, outside Reading Crown Court was acquitted today by a jury of two counts of causing death by careless driving following an incident in Berkshire on December 5, 2017 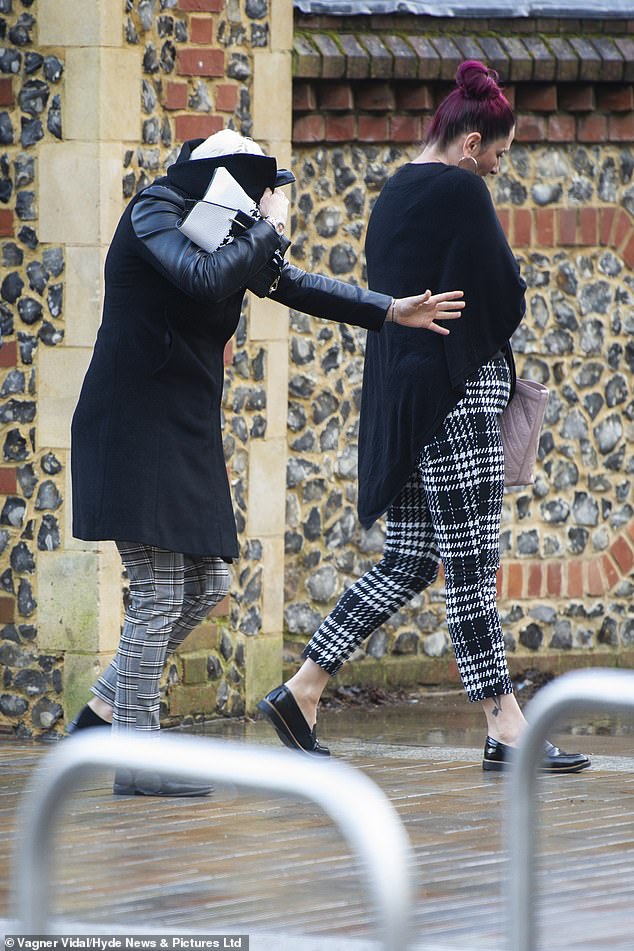 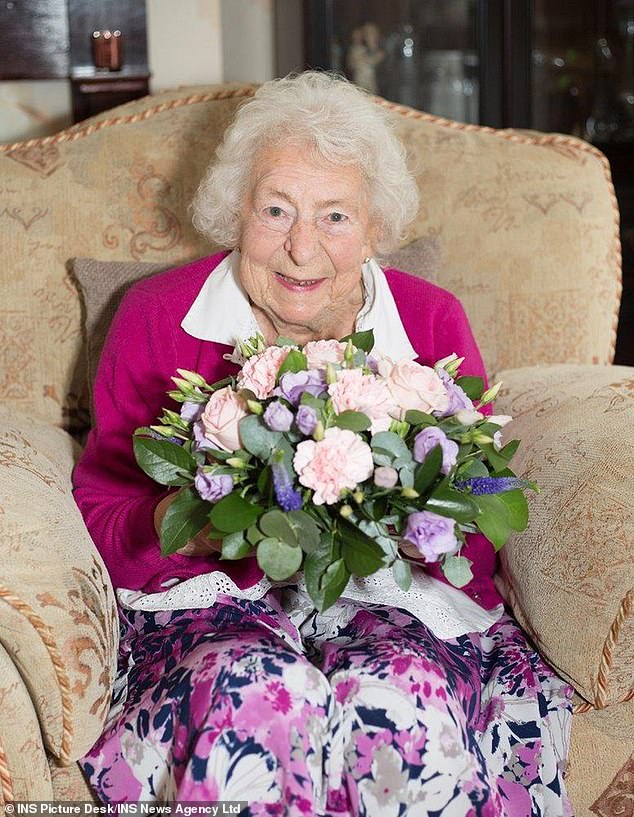 Gladys Goodwin, 91, pictured, died in the horrific crash which saw Ms Jasulaitiene’s Toyota Aygo flip over onto its roof due to force of the impact

The 36-year-old professional carer left court without making any comment, leaving Pc Dixon’s widow Samantha to read a statement on the court steps after seeing the defendant exonerated of killing her husband.

Mrs Dixon, who gave birth to his child after his death, said: ‘We now need to process all the distressing things we have seen and heard over the last seven days of the trial and attempt to move forward as best we can.’

The jury heard that on December 5 2017, on her day off, Miss Jasulaitiene was driving Gladys home from a lunch in Slough, Berkshire, as part of a companion service and attempting to turn right from the A4 Bath Road into Blake’s Lane, in Wargrave, Berkshire at just 13mph.

Father-to-be Pc Dixon, aged 39 years, was killed instantly when his police motorbike – which may have been travelling at twice the 50mph speed limit – hit the Toyota Aygo, overturning it.

The court heard how witnesses watched the car ‘wrap around’ the police motorcycle during the collision. 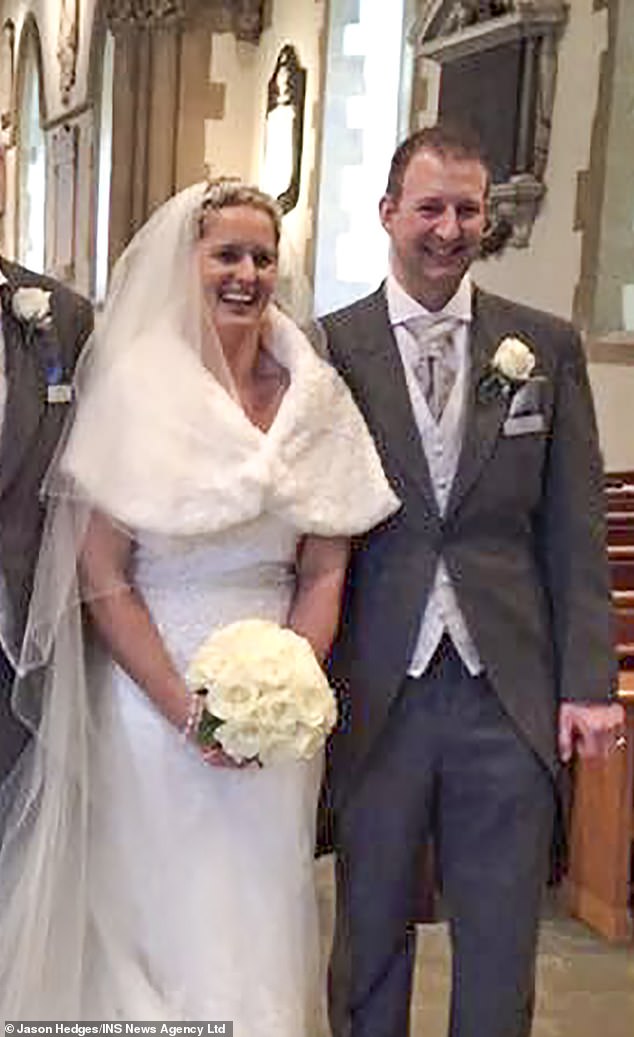 Pc James Dixon, pictured with his wife Samantha, was expecting his first child at the time of the incident. Mrs Dixon, speaking after the case said her family were disappointed with the verdict

Defending, Ian Bridge said: ‘A motorcycle and rider hit a car with two people in it and turned it over not once, twice but three times from one side via the roof to the other. That impact left three people at the scene believing that there had been a bomb. They thought an explosion had gone off such was the impact.’

One horrified witness, Karen Sutton, thought the ‘lump of black stuff’ was part of the car that was blown up.’ The lawyer said: ‘It wasn’t until she received a call from her daughter overseas, that she was she aware that a bike was involved.’

Throughout the trial at Reading Crown Court, mother-of-two Agne Jasulaitiene strenuously denied ever seeing the motorcyclist who was on a training exercise with Thames Valley Police and agents from HMRC on the day of the accident.

The jury heard the police officers were practising ‘offensive surveillance’ and were told by expert Anthony Hopkins that the ‘covert’ motorcycle had purposefully switched off its automatic lights.

Mr Bridge said: ‘The whole point and idea of a covert vehicle is that it can move around without being seen. There is no other reason you should turn your lights off without not wanting to be seen.’

After exactly one hour, the jury of eight men and four woman returned a not guilty verdict to a sobbing Ms Jasulaitiene, who lives in Crowthorne, Berkshire.

Judge Paul Dugdale thanked the jury for their service, adding: ‘You have come into this room without any idea what case you are going to try. Suddenly a very emotional case was place upon your shoulders to try, that is the big burden.

‘These cases never bring any closure to the family. The reality is sometimes in life accidents happen. We cannot have a fully trained police force when we you need it, without training. The two cannot sit side-by-side and inevitably there is a degree of risk.

‘An officer was tragically killed along with a member of the public when the police were carrying out there duties. Nobody should lose sight of that. Sometimes we are so keen to find blame, sometimes accidents just happen, it is best to look at it that way.’

Samantha Dixon – widow of Police constable James – walked out of court to make a statement on behalf of the family.

She said: ‘While we are disappointed with the verdict, regardless of the outcome it could never have changed the most important fact about this tragic case. And that is that myself and the rest of James’ family have lost a husband, father, son and brother. He was also a friend to so many.

‘Thames Valley Police have lost a committed and highly professional and respected colleague. He will be forever missed and never forgotten. Our heart and thoughts also extend to the family of Gladys Goodwin, they also lost a key member of their family in this collision.

‘We now need to process all the distressing things we have seen and heard over the last seven days of the trial and attempt to move forward as best we can.’

The police watchdog, the Independent Office of Police Conduct has investigated the deaths and compiled a report which it is expected to present at an inquest into the double death. Details of the IOPC findings have not yet been disclosed.

Following the jury’s acquittal of the woman accused of killing Pc Dixon, his Assistant Chief Constable, Tim De Meyer said that officers knew that if they broke the speed limit it had to be justifiable.

Commenting on the outcome of the case he said: ‘On Tuesday December 5 2017, Pc James Dixon was on a joint training exercise with Her Majesty’s Revenue and Customs (HMRC) and Thames Valley Police (TVP) which led to a collision between his police motorcycle and a car. 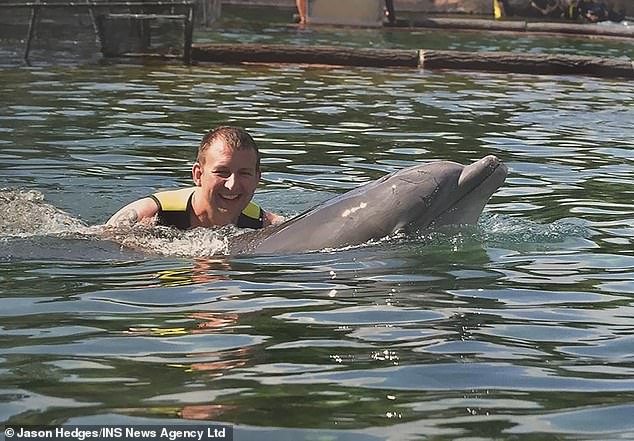 Pc Dixon, pictured, appeared on the TV show Road Wars and was a highly experienced police motorcyclist. On the day he died he was conducting a training exercise

‘Pc Dixon and Mrs Goodwin, who was a passenger in the car, died following the collision. This tragic case has affected many people and their families, friends and colleagues.

‘Pc Dixon’s widow, Samantha Dixon, an officer with us at Thames Valley Police and known to her colleagues as Sam Allen, is of course very much in our thoughts, along with the family of Gladys Goodwin.

‘Sam has been supported by specially trained family liaison officers throughout this difficult period. The welfare of officers and staff affected by this incident is also being carefully managed.

‘Police colleagues have supported each other in mourning a wonderful officer, who was affectionately known as Dixie. It is in times of such adversity that the police family demonstrates its extraordinary strength and unity.

‘The force has received thousands of messages of support and touching tributes to Dixie, for which we are extremely grateful.

‘During the trial we heard more detail about the incident in Wargrave in December 2017. The experts in the trial could not be sure of the exact speed at which Pc Dixon was travelling. Furthermore, we cannot speculate on Pc Dixon’s reason for travelling at a particular speed.

‘However, all officers are aware that if they break the speed limit, it must be justifiable.

‘Surveillance officers attend an Advanced Driver Course as well as a College of Policing surveillance course. Refresher training is mandatory for Advanced Drivers and Riders and in order to maintain their accreditation, officers must deploy as per Authorised Professional Practice. Pc Dixon had completed his mandatory training prior to the incident.

‘All learning from this case will be carefully considered and acted upon where appropriate. Quite properly, since a Thames Valley Police officer was killed, the case was subject to two independent investigations, by Sussex Police and the Independent Office for Police Conduct (IOPC) respectively.

‘Sussex Police brought the case to court, where today a jury, having listened to all the evidence, has found Agne Jasulaitiene not guilty of two counts of causing death by careless driving.

‘The IOPC carried out an independent investigation into the planning and preparation of the training exercise including risk assessments and the manner of Pc Dixon’s driving. They will decide in due course as to whether this report will be published.

‘I hope that these independent investigations will at least provide some answers to the families of Mrs Goodwin and Pc Dixon. However, we understand that they cannot compensate for the dreadful loss of their loved ones.

‘Thames Valley Police will continue to support all those affected by this incident however we can.’

Schoolboy football fan, 13, is battered by a fully grown man

Usher has “grown” over the past decade